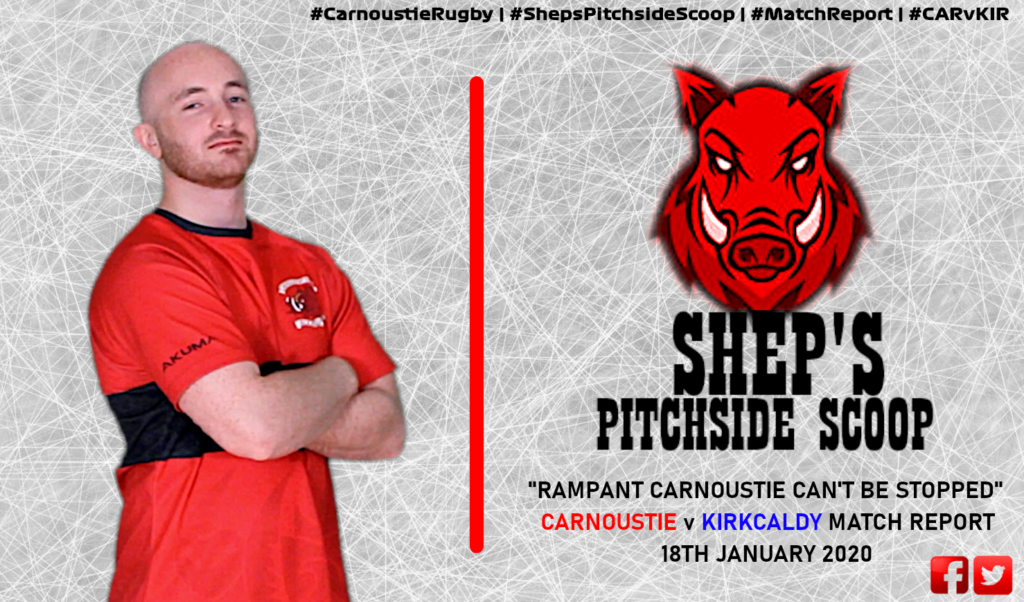 A defeat away to Kirkcaldy is the only skid mark on an otherwise clean pair of pants for Carnoustie this season, which came in the opening round. The boars were looking to clean themselves up in the return home fixture and contine their winning streak in a charge for the title. The conditions much the same as last week; cold, wet and windy, and the ground soft underfoot meant it was going to be a tough battle against stern opposition.

The game was eeksie-peeksie, an 80-minute arm wrestle. A large amount of handling errors meant there was a lot of scrummaging for the forwards and not much happening for the backs in the loose. First points came around the half hour mark when Michael Downie pounced on a slack ball from Kirkcaldy and ran in it over the whitewash. Conversion missed.

The most electrifying man in Caledonia Midlands Division 2, Kev Franco, made a typical battering run combined well with high flyer, Mark Gibson, to bring Carnoustie up the pitch. The ball was knocked on 5 metres out from Kirkcaldy’s line. The away side looked to clear their lines from here with a box kick only to be charged down and land in the grateful hands of Reece Nicoll who touched down for another 5 points. Conversion missed.

Shaun Franco turned his recent impressive form to points and scored a great try with a breath-taking finish in the corner. Conversion missed.

Final points for Carnoustie and the bonus point clincher came in the form of a Ryan Beresford smash over the line from short range. Converted by Mark Gibson.

Kirkcaldy also scored two tries and converted one but who cares when the final score was Carnoustie 22 and Kirkcaldy 12.

The match was fiercely contended with both teams doing a lot of the “ball up the jumper” stuff as is typical of rugby in that weather. Carnoustie proved to be the more physical and their hard work payed off with an impressive win, though I’m sure there were a lot of sore bodies.

Another great team performance for Carnoustie made the beers taste that much sweeter. Special mentions for Angus Sangster who was noted to run like a gazelle on the wing and made some big hits when called upon. Michael Downie, who runs around like a Labrador, always wanting the ball and proved to be a big physical presence once more in the backs. But Man of The Match plaudits go to Ryan “The Rash” Beresford, who was everywhere at openside flanker and a constant nuisance for the away team.