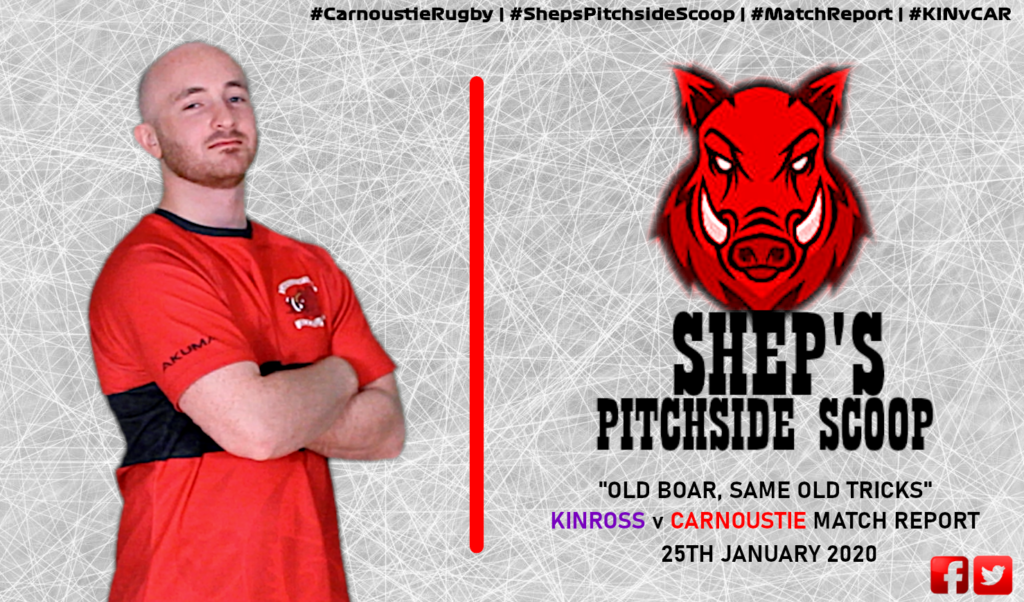 Before we all addressed our haggis on burns night, Carnoustie played away to Kinross to continue their bid for the title. Kinross has been a tough place for Carnoustie to go in recent years and has always been a hard-fought contest. The Kinross-shire men have proven difficult to break down this season and boast the best defence in the league having only leaked 80 points to Carnoustie’s 141.

The early stages had Carnoustie on the front foot and were camped in the home side’s half for long spells. Some big hits and blitzing defence repelled Carnoustie; clear evidence of Kinross’ impressive defensive record. First points came when the defensive press put too much pressure on Carnoustie and the Kinross winger intercepted a flat pass and ran in 60 metres to go under the posts. Try converted.

The Boars replied instantly from the resulting kick off and forced their way down into the opponent’s 22. From a line out Carnoustie continued to bash their way towards the Kinross try line, eventually crossing it with Owen Hughes being the man to touch down. Try converted by Mark McQueen.

Carnoustie took the lead shortly after in similar fashion with Craig Henderson bullying his way over this time. Conversion missed.

Craig found himself in a spot of trouble soon after scoring as he was caught being up to no good off the ball and received a yellow card for his actions.

Just before half time young Shaun Franco got himself another try to go two tries in the last two games as he followed up on a signature battering run from his brother Kevin and sneaked his way over the line. Conversion made by Mark McQueen.

The second half started with Kinross camped in Carnoustie’s half but Carnoustie’s defence stood firm. Craig Henderson came back on after serving his time in the sin bin and Kinross received a yellow for a high tackle.

The game became far more fluid in the second half and the ball was getting chucked around for fun by the away side. Carnoustie made several smashing runs through the opposition defence as Kinross was broken down and their impressive defence became porous. One run of note by resident old man of the team, Owen Hughes. He glided through a huge hole in the defence and made a burst for the line as if there was somebody with single glazing windows in Kinross’ in-goal area.

Kevin Franco picked up the last try of the game as he burrowed over from a short distance after a penalty. Conversion made by Mark McQueen.

Another good showing from Carnoustie and another bonus point win before a short break for the Six Nations Championship beginning. Usually moan of the match goes to Owen Hughes but for his powerful performance and senior display he received Man of The Match.