Stewart Millar, David Gray and myself are going to be biking Coast to Coast which is 130 miles on the 22nd of May to raise money for the club,
We will leave Oban about 6am and hope to be back in Carnoustie for 6pm.

We are looking to see if any of the kids would like to join us on our final leg of the journey from Broughty ferry to Carnoustie (at the black slab) on the cycle path.

The kids would need to be accompanied by an adult for this part. We would look to meet the group at the rock gardens end of the esplanade. We would expect to meet the kids at 5pm, but there will be regular updates on the clubs page as to how we are getting on and times etc!

So what we are needing is to know numbers of children who would like to take part in this, and need final numbers by Friday 23rd April.

Thank you in Advance 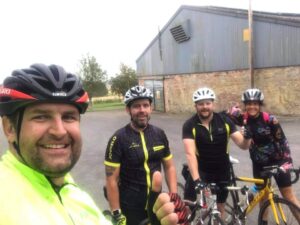 Wednesday’s Weather looks set to be just a tad better than last weeks! Make sure you don’t miss out.☀️☀️☀️?

It’s the last week of the Summer Pass Registration:

And the Single Pass for this week is now Live:

Don’t forget something to drink & your suncream!!?

CARNOUSTIE 34 v KINROSS 10
Kinross got the game in motion with Carnoustie failing to gather the ball and knocking on. Carnoustie lost the scrum against the head and were then penalised allowing Kinross to open the scoring. Kinross fielded the restart but in trying to run the ball out Carnoustie turned the ball over and with quick hands made space for Conor Blackmore to touch down, Carnoustie continued to force the pace and again good running and good hands paved the way for Michael Jamieson to touch down and convert. Keeping the pressure up with good passing from deep allowed Calum Forteath to charge down the wing to score in the corner with Mark McQueen converting. Towards the end of the half Michael Jamieson scored twice, the first from a break and the second from clean scrum ball put quickly through the hands. With no conversions. The half was brought to an end.
Carnoustie restarted and with a minute Kieran Ritson drove over for a try but with no conversion. Carnoustie took their foot off the pedal allowing the visitors to dictate the game. But the defence, although frantic at times, was solid, until the final minutes when Kinross got a score for their efforts touching down and converting. Within minutes the final whistle was blown.
Team : M.McQueen : J.Donnachie : M.Whyte : M.Jamieson : C.Forteath : C.Blackburn : D.Findlay : S.Murphy : K.Murphy : C.Henderson : R.Nicoll : J.Forster : K.Ritson : T.Franco : O.Hughes : M.Gibson : D.Nicholson : A.Martin : R.Beresford : S.Queen : K.Dandie : K.Patterson.

All games will be screened live at Club Lounge.
This Saturday will be Scotlands first game in Six Nations.
Scotland v Italy ki off 2.15pm
There will be Italian Pizza available for a donation.

SUPER SATURDAY
Saturday 16th March
England v Scotland kick off 5pm
Food will be available.
All the other fixtures across the Six Nations will be shown at Club Lounge or Bar Area.

After a long holiday break both teams took time to settle into a constructive game. Carnoustie were mainly in a defensive position but defended their line strongly, before breaking up field and pressing the defence back. Eventually the pressure told with Tony Franco Touching down with the conversion added. The Medics again pressed forward and from clean scrum ball broke the defence to touch down, the conversion was missed. The Medic again had field position but resolute defence by Carnoustie kept them at bay until half time.

Carnoustie restarted the second half but in a period of ascendance dropped a ball in mid field allowing it to run loose, the Medics winger hacked the ball ahead and chasing up quickly regathered to touch down, the conversion was missed. Carnoustie eventually got on top with a series of drives deep in the home twenty two before Rob Blyth touched down, the conversion missed. Carnoustie kept the best to last with a series of breaks and keeping the ball moving found a defender out of position to race through the space and touch down at the posts, with the conversion added. A second try for Tony Franco but a real team try. Within minutes the referee brought the game to an end.

Carnoustie kicked off against the league leaders who cleanly fielded the ball and broke up field before setting up a drive deep in the home twenty two. They gained a penalty which was sent wide of the posts. With the aid of penalties Blairgowrie consolidated in the home twenty two before breaking from a scrum to touch down and convert. Carnoustie lifted the siege to press on the visitor’s line only to turn over the ball allowing Blairgowrie to clear their lines. From deep Blairgowrie broke the defensive line and sending the ball wide only to knock on with the line beckoning. Blairgowrie again drove close to the line but stout defence allowed Carnoustie to clear. From a scrum in mid field Connor Blackmore chipped the ball over the defensive line with Carnoustie securing the ball and playing it through the hands allowing Kieran Ritson to touch down with no conversion. With half time approaching Blairgowrie set up a strong drive from a line out to touch down with no added conversion.

Blairgowrie got the second half going and regathered the ball but the defence was solid. From a deep kick Carnoustie fielded and put the ball quickly through the hands for Connor Blackmore to touch down, again the conversion was missed. Carnoustie kept up the pressure with Mike Downie beating several defenders before being brought down near the line. Having gained two penalties Carnoustie tapped the second allowing Craig Henderson to crash over and touch down with no conversion. Blairgowrie replied by breaking clear down the wing to score and immediately from the restart they ran down the same wing to score and converted both tries.

Carnoustie were rattled and failed to clear the 10 metre line with the restart kick but settled again and from a long clearance kick set up an attacking position, tapping a penalty and driving forward with Connor Blackmore making the touch down and Michael Jamieson converting. The referee blew for full time.

Carnoustie travelled the short distance to Broughty Ferry looking to make it a double against local rivals Panmure having won their home game.

Carnoustie kicked off and secured the kick and drove forward gaining two penalties in quick succession. From the second penalty Carnoustie drove, recycled cleanly and sent quick ball across the field giving Fullback Mark Gibson space to cut back and pierce the defence to touch down and then convert. From the restart Carnoustie were penalised with Panmure finding touch. Panmure lost the lineout allowing Carnoustie to break 70yards downfield. Carnoustie pressured the defence allowing them to charge down a kick. Michael Jamieson was first to react gathering the ball before stepping through a disorganised defence to touch down and convert.

Carnoustie defence was solid and from their own half they broke again with Kieron Ritson charging forward from half way to score out wide. No conversion added. Carnoustie again broke from deep with Conor Blackmore breaking some 7 yards but he was pulled down close to the line and with no support the chance was lost. Nearing half time Panmure made good ground following an interception but the cover got back to pull down the ball carrier. The Referee blew for half time.

Panmure restarted the second half which turned into a defensive game for Carnoustie. They spent the greater part of the half defending strongly to the extent of holding up a ball carrier over the line. On one occasion that Carnoustie got over half way, Michael Jamieson sent a penalty between the posts.

Attacking flair in the first half and solid defence won the day. This was a solid win with every man giving his all for the cause.

In the first return match of the season Carnoustie travelled to Falkirk having won the home game.

In the second half play was less open and scoring restricted.  The first try of the half from a tap penalty again saw Michael Jamieson touching down, with no conversion. From a well-placed kick to the corner Michael Jamieson chased hard to get his hands on the ball and touch down. Falkirk staged a recovery to pierce the defence to run a try over the line.  In the last move on the game Mitch Whyte intercepted a loose pass and ran unchallenged to touch down with Michael Jamieson adding the conversion.

Carnoustie travelled to Stirling in search of league points.  Carnoustie got the game underway quickly gaining a penalty which was tapped only to knock on. They then pushed forward to pressure the home defence, missing a penalty kick to the posts but in their next push to the line Craig Addison burst through an attempted tackle to touch down with Michael Jamieson converting. Carnoustie continued in the ascendancy but could only add a penalty to the score sheet.  The home side picked up the pace and gained a penalty which was tapped and played through the hands to touch down wide out. The conversion was missed. Carnoustie pressed forward on half time and from a scrum five drove to the line allowing Owen Hughes to touch down and Michael Jamieson to convert. The whistle was immediately blown for half time.

Stirling restarted with Carnoustie fielding and working their way up field with ball being swiftly transferred to winger Jordan Donnachie to touch down wide out. Conversion was missed.  Stirling recovered to score two quick tries with the conversions added to be back in contention. Carnoustie kept their heads up and added two penalty kicks by Michael Jamieson to the score. From a line out in midfield Michael Jamieson split the defence to score and convert with a strong line break. Michael Jamieson added a late penalty but Stirling had the last word scoring with a strong drive from a scrum but with no conversion.